I have been wanting to do this for awhile. A couple of years back, I saw a similar idea on Pinterest. They had attached different paper rolls to the wall using tape and given their toddler some marbles to roll down the homemade marble run. I fell in love with the concept, but not so much the taped rolls to the wall. I decided that it would be fun to attach rolls to the fridge using magnets. This way the kids could easily change the “run” and it would make clean-up/set-up much quicker than the taped version.

I also knew that I wanted our “marble run” to be fun and colorful. Nothing screams homemade like a few empty toilet paper rolls attached to your fridge. So I came up with the idea that the boys could use some of my scraps of scrapbooking paper to mod-podge to the rolls to give it a cute-look opposed to the recycled-homemade look.

I ended up cutting the wrapping paper roll in half.

I want to start out by saying that I loved this craft for the boys. My 2-year old could even do it {un-like the halloween bags that turned into a mommy only actitvity}! He was able to paint his rolls with mod podge and it didn’t make me nervous about him getting it all over his clothes or the kitchen (even when he did it easily washed off everything).

Cut scrapbook 12″ x 12″ paper in half to wrap around the roll. Roll the paper around the glue covered roll and seal the edge.

Note: We did not coat the outside of the paper with mod podge, like we normally do, such as with the block letters.

Once the rolls are dried, maybe 5 minutes, cut a piece out of both ends to allow the marble to drop into the roll. My piece that I cut out was about 2″ x 1.5″. Once you cut this piece out, you may see that your paper is separating from the roll around the cut areas. Use your hot glue gun, or more mod podge, to re-attach the paper in those places.

Now attach a button magnets to both ends of the roll, like I did below. {For anything longer than a paper towel roll attach another magnet in the center of the roll.}

For the end/bottom of the marble run, I attached a couple of magnets to a small plastic tupperware to catch the marbles.

Now arrange your marble run into a fun course for your kids, or if they are older let them come up with a course. Give them a couple of marbles and sit back to watch all the fun they will have. 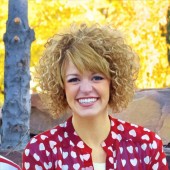